At dinnertime as a child, Maria Sanchez took it for granted that her mother and father would join her around the table virtually every evening to share the day’s experiences. Most summers, one or both parents would be off, and the family would depart for lengthy, often exciting vacations. Before long, the young girl realized that she had it better than most of her friends. And eventually she figured out why: her mom and dad were professors, her friends’ parents worked in business.

Maria Sanchez never forgot the happy work-life balance her parents had achieved—or the satisfaction they derived from influencing students’ minds. After several years with a Big Four accounting firm in which home was usually a hotel room somewhere, she too found herself yearning to make a lasting impact on the next generation. She decided to become a professor too.

“Being able to help students is something I knew I would really enjoy,” she says. “And I do.”

Flexibility and balance have a different meaning for her at this stage of life. These days, she can often be found running errands on a Tuesday morning, while Saturday might be swallowed up with research work or grading papers.

“I still work the same number of hours as I did,” says Dr. Sanchez, “but with flexibility. I enjoy a work-life balance that comes with a career in academia.”

All that, plus she gets to avoid rush hour on the busy roads around Philadelphia.

More importantly, she gets to influence students on career and academic decisions as she interacts with them in the classroom and in her office. “Several students in my auditing class told me they made the choice to enter public accounting based on my class,” she reports.

But guiding young people to career choices is only the beginning. Students are often in the dark about how to conduct themselves on a job interview. “They’ll come in and ask me how to handle interview questions, and while I do that, I also show them how to ask the right questions also.”

One graduate student in accounting is even more indebted to Professor Sanchez. “He was in one of my courses, and I realized he was a very good candidate for an AICPA scholarship. He didn’t even know they existed, and I showed him how to get one.”

The student now has his Masters, and still sends Dr. Sanchez regular news about his career progress. He will soon be able to track hers too—her second research paper has been accepted for 2004 publication in one of her field’s prominent journals.

Dr. Sanchez has recorded several personal and professional milestones: marriage, motherhood, publications, tenure and promotion to Professor of Accounting at Rider University. She has been named to numerous fellowships and earned honors for her research, and she has spoken at PhD Project conferences. Dr. Sanchez is Director of the Masters of Accounting program and faculty advisor to the Rider Accounting Society. 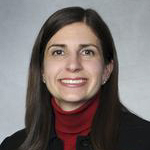