The most severely impacted patients with spinal cord injury or brain disease are said to be “locked  in.”

Completely paralyzed, they can neither speak nor move, not even to shake their head.

Through trailblazing research into brain-computer interfacing, she develops systems that enable these patients to communicate with their loved ones and caregivers.

This might never have happened had it not been for the peer support and encouragement she received through The PhD Project.

Adriane Randolph was a successful global business consultant when she realized she needed to be having a greater impact “on the lives of real people.” When the infant field of brain-computer interfacing attracted her attention, it was still largely the stuff of science fiction. But, she discovered, serious academic research was promising to turn sci-fi into reality.

And so the realities of the academic world collided with her passion: how would she get published in major journals, or even gain academic recognition, from research on a topic not yet accepted as a legitimate niche?

She wondered if she might be making a mistake.

So, she asked her colleagues in The PhD Project’s Information Systems Doctoral Students Association for guidance.

There, she found strong support and encouragement to follow her dream and her path.

“This is really interesting work,” they told her. “Stick with it—you are impacting lives. You are really helping people.”

And so she did.

Today, with brain-computer interfacing an accepted research topic and Dr. Randolph respected as a leader in it, she is grateful that she did. And she is appreciative of The PhD Project’s contribution to her decision.

“I don’t think I would have had the in-field success I now have without The PhD Project,” she says. “I am able to publish in mainstream information systems outlets. That has been through the championing of people I have met through The PhD Project.”

Dr. Randolph, as Director of the BrainLab at Kennesaw State University, and her students bring their pioneering, nationally recognized work right into the homes of patients.

The work is based on the same technology that marketing researchers use to learn what consumers really think: it captures and reads brainwaves. Utilizing it, Dr. Randolph can train a parent, in the family home, to place an electrode cap on an injured child’s head. The cap, connected to a device called a bio-amplifier, turns up the brain waves’ “volume” and transmits them to a computer as the patient uses thought to spell out the words she wishes to communicate. The computer translates the waves into words the parent can read on a screen.

Sometimes, the parent reads a message like “Please turn the TV off,” or “Please look at the sore on my leg.” Sometimes the words are, “I love you, Mom.” These are the moments when Dr. Randolph takes special pleasure in appreciating the decision she made, a decade earlier, to stick with her passion.

“I once realized that I am bringing hope to families that might have lost it before I arrived,” she says. “When you’re doing experiments in the lab, you can under-appreciate that part. But when you’re in the field working with families, you can see it.”

The work that Dr. Randolph and others are doing is on its way to becoming mainstream, with commercial applications starting to emerge. Before long, caregivers won’t need a team of researchers at their side to direct their interactions with patients: they will be able to place a headset on the patient and operate a user-friendly system.

“It’s exciting to be part of the initial ground level of brain- computer interfacing, but it is also humbling,” Dr. Randolph says. “It is humbling to think of bringing hope to families, and laying the groundwork for widespread use of this in the future. 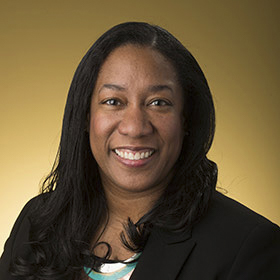