A Moment of Clarity

Terry Esper, logistics manager for Hallmark Cards, ended one lengthy corporate conference day with the social ritual of joining a colleague for a post-session beer. He was totally unaware the relaxing moment was about to change his life.

“He asked me,” Dr. Esper recalls, “what I would do if I had enough money and didn’t have to work anymore.”

“I answered that I’d be in a school, reading and learning and teaching, for the rest of my life. I said it as a joke, but at that point I felt an inner pull. I started feeling that my years in industry were not my calling—they were about preparing me for my calling.

“It was a moment of clarity for me. I realized I was meant to be an academic.”

The thought germinated within Dr. Esper for several weeks after he returned home to Kansas City, and then surfaced unexpectedly as he arranged an educational program for a professional association he belonged to.

“I wanted to get a new professor from my MBA alma mater to come and speak, and I called her for what I thought would be a twenty-minute conversation about the event. It turned into two or three hours of talk about becoming a professor. Something just connected with me during that call.”

By the end of the conversation, the Hallmark manager and the professor had decided that they wanted to work together, and she had agreed to advocate for his acceptance into the doctoral program. It was March, past the application deadline for the University of Arkansas business Ph.D. program, and Dr. Esper assumed they were talking about something eighteen months in the future.

But the professor told him there was a position open for the coming year if he wanted it. Dr. Esper’s application was speedily reviewed and approved.

With the professor Dr. Lisa Williams serving as his mentor, Dr. Esper was presenting at a national conference in his first year. Supported in part by a federal grant and stipend, he finished his program in three years—with three publications and three conference proceedings to his credit. He is now on faculty at the University of Tennessee. His research area is inter- organizational collaboration and supply-chain management.

“I could have taught with just the MBA, Dr. Esper says, “but the Ph.D. is about knowledge creation versus knowledge processing and regurgitation. I enjoy the research that I do as a professor very much.”

Dr. Esper received the Chancellor’s Award, one of his university’s highest honors, for his efforts to mentor  and increase the representation of minority undergraduates, and has been nominated for other prestigious awards. He served as associate director of a program that enables local corporate executives to interact with and form mentorships with undergraduates. He no longer listens, in after-work social settings or anywhere else, to suggestions that he might want to consider changing careers.

Associate Professor of Marketing and Logistics Terry Esper was recently named the 2018 recipient of the Williams-Qualls-Spratlen (WQS) Multicultural Mentoring Award of Excellence by the American Marketing Association. 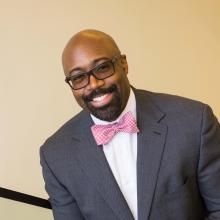