Banking On A New Career

As a retail branch manager and vice president for one of the world’s premier banking companies, Patricia Hewlin often found herself at the front of a training classroom, instructing employees in job skills. Before  long, this rising corporate star realized that teaching, even more than banking, was her calling.

Fortunately, her employer knew just what to do. Citigroup—a founding sponsor of The PhD Project—encouraged and helped her to pursue a new career in academia, though it meant losing a prized employee.

“I was enjoying not only training my employees, but also watching them grow from level to level,” says Dr. Hewlin. “I loved seeing the results, and I became interested in how employees get motivated to advance. Now I was more interested in diagnosing employee issues that had long-term implications for the corporation than fully devoting myself to short-term solutions, both of which are important to effective business management.”

The successful banker discovered that “I was asking the kinds of questions that scholars had, and I was enjoying it.”

“Companies understand that research and understanding lead to increased revenues, but in a fast-paced environment the emphasis is always on making the numbers.”

Rather than dream or despair, Patricia Hewlin reached out. Aware that her company sponsored The PhD Project, she contacted a Citigroup executive familiar with the program who could tell her more. Within a year, she was accepted by a top university’s Ph.D. program.

Today, Professor Hewlin is “doing exactly what I wanted to do.” Students immediately sit up and pay close attention when their professor reveals her corporate background, and she draws on it frequently in her research and teaching. Students approach her for advice on careers and graduate study in banking, and she has guided several of them onto the path.

And, whenever Dr. Hewlin senses a potential match, she introduces her students to executives at her former employer— setting the stage for the day when Citigroup starts to recoup, several times over, the investment it made when it encouraged the rising young banker to leave the ranks and become a professor.

Dr. Hewlin’s research centers on the ways organization members express and suppress aspects of their identity, such as personal values and beliefs at work. Her research also spans to gaining insight on how members make sense of and cope with organizational value breaches in mega-churches and other values-driven organizations. Dr. Hewlin is an award winning scholar. She has several publications and has presented at numerous conferences in the US and abroad. Dr. Hewlin has been quoted in several print media, was featured in Black Enterprise magazine, and has appeared on BET News. She enjoys mentoring doctoral students and participates frequently in the Management Doctoral Student Association’s annual conference. 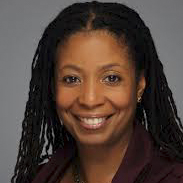