Dan Stewart, back in his undergraduate days, paid more attention to his professors than did most of his classmates. He was sizing them up as potential role models.

“I liked watching my professors, and I held them in high esteem,” he says. “I thought that being up there and doing that was something I’d enjoy. But not having anyone in my family who had done it, I didn’t know how.”

It was 1991, and in one of those not-so-accidental coincidences, Stewart received an invitation to the Minority Summer Institute—a program that was then introducing minorities to a career in teaching business in college. “An administrator told me why I got it—I was studying business, had gotten good grades, and was involved in leadership activities.”

He enrolled, immersed himself, and swiftly sold himself on becoming a professor. First on his agenda, however, was a four-year commitment to the military.

Fast-forward a decade, and Dan Stewart became Professor Stewart at Washington State University, having earned his doctorate at Stanford after completing Army service.

After concentrating heavily on research in his Ph.D. program, he teaches three classes each year. “I’m trying to become a good teacher,” Dr. Stewart says. “I hope I can influence a few of my students to go for their Ph.D.”

In 2021 he launched the Journal of Indigenous Business  & Public Administration (IBAPA) https://ibapa.org/ 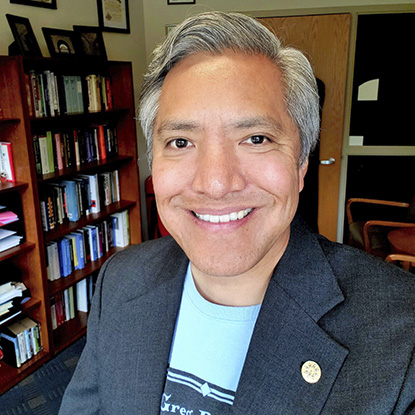