One city. How hard could it be?, IBM executive Harriette Bettis-Outland wondered.

Riding the wave of a successful, ten-year sales and marketing career in computer software, she had begun considering other options when her baby son was born. At the time, she was traveling five days a week—which didn’t leave much time to experience, much less enjoy, motherhood.

Dr. Bettis-Outland had harbored a desire to become a professor since her MBA studies. Observing those teachers she admired most, she concluded it would be best to first work in corporate America for several years. That way, she reasoned, she would garner a collection of useful stories to share with her students.

But now she also wanted to tell other kinds of stories— like “Rock-a-bye Baby” and “Twinkle, Twinkle Little Star.”

The timing, the urge to enter academia, and the demands of parenthood had all aligned, and Dr. Bettis-Outland started exploring the ins and outs of becoming a doctoral student. The first thing she heard—and the recurring theme she would hear— was how difficult and stressful it was for anyone, and especially a new mother, to pursue a business Ph.D.

But Dr. Bettis-Outland had a broader perspective from all those years of business travel. After routinely crisscrossing the country each week—California today, the East Coast tomorrow—the stress and challenge of a doctoral program couldn’t be that intimidating. After all, she would get to do all the work in just one city. Looking at it from that angle, she realized she might not find it so tough after all.

To learn more about the path to a business professorship, Dr. Bettis-Outland attended a PhD Project conference. She left excited and “on fire,” she remembers. She also left the conference early to fly home for a party—her son Elliot’s first birthday.

In the following weeks, though, she took and retook the GMAT exam, left her job to devote her energy to entering a doctoral program, and began the ritual of applying to schools. “In retrospect, leaving a good job with a one-year-old child was crazy,” she recalls, “but sometimes life just works out.”

Dr. Bettis-Outland was accepted by one of the schools she coveted most. Her program included an attractive option to take some coop classes at a cross-town university, Georgia State University. To her surprise, she found that State’s doctoral program was more attuned to her interests than the one in which she was enrolled. She decided to seek a transfer. Then, around that time, personal tragedy struck: her marriage unraveled. “I was divorcing my husband and my school at the same time,” she says. “It was a very stressful time, but I just felt that things were going to work out.” Friends and peers she made through The PhD Project called in with words of encouragement constantly. “They were the ones who sustained me,” she says. She switched institutions without missing a day of study.

Compounding her challenge, Dr. Bettis-Outland suffered an accident and broke her leg in the semester before comprehensive exams. Getting to school now  seemed impossible. She reached out again to a PhD Project colleague— someone also at Georgia State, Constance Porter. Dr. Porter, intently pursuing her own doctorate, squeezed in time to drive her friend to and from class each day, and even to pitch in with picking up Elliot, then seven, on occasion. The leg, the child, and the doctoral student’s dreams all came through the challenge intact. That semester, Dr. Bettis-Outland never missed a class— and was never even late.

Dr. Bettis-Outland is now a professor at the University of West Florida. “Getting through took a whole lot of faith and a lot of friends,” she says. “Looking back, I was too busy to know what I was doing was crazy. I was used to challenges, and I never paid attention to the negatives.”

Having confined the challenges to just one locale, Dr. Bettis-Outland took them on one at a time and conquered them. Not having to step on an airplane made it all seem do-able.

Dr. Bettis-Outland successfully balances work with life in one location: Pensacola, Florida. 2008 was a standout year for her: she was named Outstanding Faculty Member of the Year by her university’s Marketing and Logistics Association, was co-editor of the Journal of Business and Industrial Marketing’s special issue on trade show marketing, and received a summer research grant from her university. In 2008, she was elevated from vice chair to co-chair of the American Marketing Association’s Relationship Marketing Special Interest Group. She has published three articles and many conference proceedings and presentations since 2003, having overcome the challenge of a hurricane destroying her home in 2004 and forcing her into temporary housing for two years. 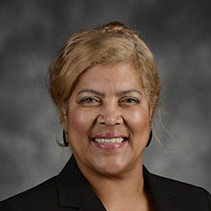