The trail to one of the first Fulbright Scholarships awarded to a PhD  Project participant*  traces back to  Toronto, Canada and the 2008 meeting of the Project’s Information Systems Doctoral Students Association, and leads to a lecture hall at Germany’s famed University of Potsdam.

“Renée, when are we going to write our first paper together?” Dr. Randy Bradley, one of that DSA’s most popular and engaged mentor-professors asked newly-minted PhD and friend Renée Pratt at the 2008 conference.

As a first year professor, Dr. Pratt was gratified to receive this unsolicited invitation from a widely published, more senior faculty member. Her instant reply boldly stepped over those inner feelings. “How about now?” she suggested.

Dr. Bradley accepted, and a research collaboration was born.

For Dr. Bradley, it was one of many such arrangements: his hallmark, as a senior doctoral student and then faculty member (see An Unusual Promise) was collaborating with other PhD Project scholars. For Dr. Pratt, it was an invitation that would lead her research in directions she had not anticipated.

The two scholars were hardly strangers, having met at Dr. Pratt’s first DSA meeting in 2003. By the following year, she was secretary of the organization, and Dr. Bradley, as immediate past president, was coaching her as well as being her cohort on leading the group. A year later, he was encouraging her to run for top leadership of the DSA—which she did.

So it was not a complete surprise for Dr. Bradley to suggest to Dr. Pratt in 2008 that they collaborate. Nor was it unexpected for her to see how readily her focus on business enterprise systems melded with his concentration in health care enterprise architecture. What she didn’t anticipate was her rapidly increasing fascination with health care issues. She and Dr. Bradley would collaborate on four papers over the next two years. Before long, the two were interviewing hospital administrators across the United States on the emerging issue of electronic health care record systems—or, in the tech-talk of Dr. Pratt’s discipline, “post-adoption diffusion of technology.”

Specifically, Dr. Pratt became intrigued at the technological aspects of the burgeoning business, medical and public policy issues surrounding the inexorable spread of electronic medical record keeping systems. So deeply did she dive into this vital topic that, in a very short time, she was

well published, well versed and developing a reputation for expertise in it.

Receiving a Fulbright Scholarship in 2012 to pursue this research further in Germany was high-level validation of the quality of her scholarship. A Fulbright is one of the most competitive and prestigious awards programs for research in the world. A Fulbright award appears on the resumes of more Nobel Prize laureates than any other honors program: 53 Fulbrights have received Nobels; another 78 won Pulitzer Prizes.

Dr. Pratt, whose mother was a nurse, spent much of the 2012-13 academic year in Germany. There, she studied that country’s move toward electronic health record systems and what lessons the United States might learn from the German experience. Near the end of Dr. Pratt’s research stint, Dr. Bradley was invited to co-present a symposium at the University of Potsdam with her. Scholars and practitioners at the German university listened carefully as the two PhD Project professors offered their insights on international opportunities and challenges in the health care information systems field.

The questions arising within her area of interest are compelling ones that affect every American: how  can hospitals and providers better use electronic health recordkeeping to enhance operational and clinical outcomes? To reduce medical errors? To control costs? What is the appropriate balance between maintaining security, patient privacy and centralized recordkeeping? These are questions that inflame passions in public policy debates. At the nucleus of   them   lie   technology   issues   that   can   be   explored

Much rides on the governmental, medical and business decisions that will emerge in coming years, all of it influenced by the research that Dr. Pratt and others in her field are now conducting. None of these compelling questions is theoretical or abstract: under current U.S. law, the first stage of nationwide implementation of electronic health records is mandated for 2015 throughout the United States. Dr. Pratt’s work in Germany has already produced two papers, with more on the way, as well as a teaching case based on her findings. She is now expanding her work to examine progress and conditions in the health care systems of other European Union countries.

Dr. Pratt is certain in ascribing cause and effect: “Had it not been for The PhD Project,” she says, “I would not be where I am now. The people and the discussions through the Doctoral Students Association helped provide strength, awareness and support as I wove through the passage of the PhD and now the tenure process.”

Dr. Pratt has since paid that forward: she served a three- year term as faculty adviser to a more recent cohort of IS doctoral students in The PhD Project’s DSA.

“Doctoral students call me all year long,” she says. “They want to know, ‘What’s it like to go through the job interview process?’ ‘What’s it like to be a minority in a majority- dominant school?’ ‘How do I balance research, teaching and service?’”

Some of these doctoral students summon the courage to ask her, or Dr. Bradley, if they can collaborate on a research paper together. She considers each request with the memory of the day in 2008 when Dr. Bradley invited her to co-author with him.

“My door, my phone—everything—is always open when those questions come in,” says Dr. Pratt.

“I have an opportunity to mentor students of all groups and hopefully provide them insight and preparation for our diverse workplace,” she has said. “It is my hope that my experiences in the workplace—private and public—and in academics, will encourage, motivate and engage others to explore computer systems and information systems in ways they never imagined.” 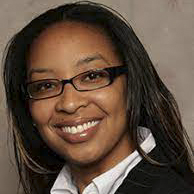