One of the active participants in The PhD Project’s formation, she was also one of the first African-American women to head a major university’s accounting program and has been a member of an important federal government financial advisory board as well as a respected teacher and researcher. Dr. Callahan is perhaps most talked about for an enduring change she has driven: improving the education and preparation of doctoral students and junior faculty.

Born in poverty to a factory worker and a domestic, Dr. Callahan went on to success in college and then in corporate accounting. Ultimately, she heard and answered an inner calling: to pursue an academic career. Upon realizing that it would take a PhD to fully realize her dream she hesitated, unsure if she could meet the rigorous challenge. She reached out to seek the opinions of her favorite undergraduate professors. They told her, “We know of no African-American woman who has ever earned a doctoral degree in accounting.” But they also assured her that if she chose this path, they had no doubt that she would achieve her goal.

Dr. Callahan has written that nothing she had experienced in life to that point prepared her for the degree of prejudice she encountered in the upper reaches of academia she now entered.

“I was absolutely stunned by the accepted training of a doctoral student and totally unprepared for the emotional toll of the complex problems facing the few African-American women in academe,” she later wrote in a published anthology. What  she  encountered  was  more  than  ordinary  racial prejudice: “Although I met all intellectual challenges required by the rigors of my doctoral program, I found the accepted training of a doctoral student unduly intellectually restrictive and at times very demeaning. The isolation and loneliness were debilitating.”

Determined to overcome the challenges of earning a PhD and the rigors of junior faculty status, she did—with distinction. But her doctoral experiences gave birth to ideas that would drive the career that followed: the newly-capped Dr. Callahan vowed to create a different experience for the countless doctoral students and tenure-track young  faculty who would follow and study under her:  “I decided to interact with my doctoral students in an entirely different manner, to treat them as my colleagues and to invite them to be full co- authors on my research projects.”

While still untenured, she gave full co-authorship credit to a graduate assistant, who by tradition would have been merely thanked in a footnote. She did so despite pressure from senior faculty to conform to norms: “I said I didn’t care; it felt right for me,” she later explained.

She also concluded that the very fundamentals of the doctoral process were seriously flawed: an “apprenticeship model” in which students are “entirely dependent upon the goodwill of tenured professors who are not subject to any accountability.” That too, she decided, would have to change. This decision would define her career as she proceeded to earn tenure—twice—and then turn her beliefs into practice in positions of increasing prominence and responsibility from the 1980s on, at Massachusetts, Notre Dame, the University of Arkansas, at Memphis and, as of 2013, Louisville.

Arriving at Arkansas in 2001 as director of the accounting doctoral program, she brought with her a mission—and won university backing of it—to restructure the traditional apprenticeship model she so disliked. The model she created would hold tenured professors accountable and required weekly meetings with doctoral students, joint research teams with assistant professors participating and full co-authorship credits for students. Not that PhD candidates would be coddled under the  Callahan model: they were expected to complete their studies in three to four years, hopefully having presented or published in a top-level forum.

In her tenure, the Arkansas doctoral program attracted higher-quality students, increased its funding by 50% and won recognition for national publications and presentations. The University of Arkansas honored the Callahan model with its Provost’s Award.

Influenced and mentored often by veteran faculty members—many of them white males—in her early academic days, Dr. Callahan made an entry in her mental “accounts payable” ledger. As an established professor, she began taking on the mentor role herself, almost without noticing: “I think I’m that way about most things in my life. If I can be helpful, I want to be. It’s just who I am as a human being. If somebody is walking out off the curb, I’m probably the person that’s going to jump up and try to pull them back.”

Metaphorically, Dr. Callahan has yanked many a doctoral student and junior faculty member back to the safety of the curb and helped guide countless more advance down their path. One of them is now Dr. Gregory Ramsey, Associate Professor of Information Systems at Morgan State University. He recalls the day he “hit a snag” nearing completion of his doctorate. It was more like a sinkhole: having already left the college of his PhD program in Minnesota for a fellowship in New York, he was told that he needed to rewrite his doctoral dissertation. He had no clue what to do next. The PhD Project connected him with Dr. Callahan, who was in Memphis. She took him on “as one of her own students,” and coached him through the crisis despite the geographical and cross- discipline challenges, he recalls. “She’s like Superwoman, flying around in a cape with an “S” on her chest helping doctoral students,” says Dr. Ramsey.

In the mid-1990s, the late Sandra Shelton, newly named assistant professor of accounting, received her first invitation to present a scholarly paper. “I need some mentoring,” she told herself. She drove from Chicago to meet with Dr. Callahan, whom she had met at an early PhD Project planning meeting, at the University of Notre Dame in South Bend, Indiana. By the time she returned home, Dr. Shelton knew exactly how to deliver the presentation. So began a friendship and mentoring relationship which lasted third decades. Paying it forward, Dr. Shelton went on to mentor innumerable doctoral students, both within The PhD Project and through all her other work. In 2010, an exceptionally promising undergraduate in her class revealed an interest in pursuing an accounting doctorate. Dr. Shelton pointed the young woman, Porschia Nkansa, in the direction of Memphis where Dr. Callahan then chaired the School of Accountancy. Quietly and behind the scenes, Dr. Shelton encouraged her mentor to admit her mentee to the doctoral program. Ms. Nkansa excelled when she arrived, and with a recommendation and support from Dr. Callahan, received a prestigious internship in Washington, DC at the Public Company Accounting Oversight Board. Upon completing her degree and starting what appears to be a very promising career at California State University, Los Angeles, she will be a third direct link in a chain of mentorship that traces back to that 1994 meeting in Montvale, NJ.

And so, said Dr. Shelton, Carolyn Callahan is “a mentor of mentors.”

Dr. Shelton was KPMG Distinguished Professor of Accounting, a title also once held by Dr. Callahan, at DePaul University.

“I have developed a deep empathy for the vulnerable in the academy because I personally know the pain of being an ‘outsider’ inside the university. I view an academic career as a life of service to one’s students, colleagues and profession.

When I go into the classroom, I feel a moral obligation to challenge my students on an intellectual level. Faculty popularity contests and grade inflation, with its associated ills, do not serve our students well. I am often told that minority students need me as a role model; however, I feel that my majority students also benefit from my presence. I try to stress the importance of ignoring physical attributes in assessing competency. I embrace the responsibilities of the trailblazer and I hope other women and minorities will follow my path.”

Excerpted from Labors From the Heart: Mission and Ministry in a Catholic University, University of Notre Dame Press, 1997. 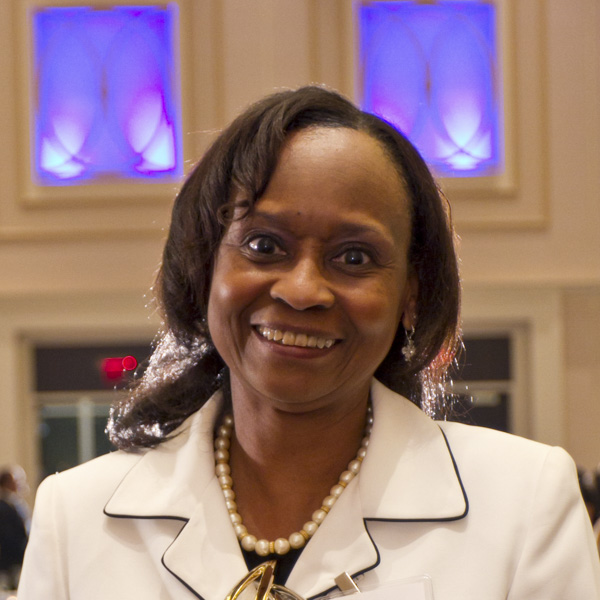 Brown-Forman Endowed Chair and Professor of Accounting, University of Louisville